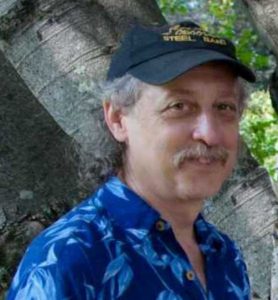 Eric Rollnick began playing drums at the age of eight with a Drum and Bugle Corps in New Jersey. Since then, percussion has always been a part of his life. He played in rock bands in his teen years and later branched out into blues and jazz.

It was another 20 years before he was bitten by the “Pan Jumbie”. In 1980, the mesmerizing sound of steel band at a music festival near his new home in New Hampshire captured Eric’s musical interest, and started him on his journey into pan culture. Eric’s desire to learn the craft of building and playing pan led him (in 1989) on the first of what has become a yearly pilgrimage to the birthplace of pan — the republic of Trinidad and Tobago. Here Eric learned firsthand the pan’s development and history. He feels much gratitude towards the pan crafters and players who taught him their art, and shared their techniques and skills with him. In 1994, Eric formed the five-member band Mango Groove, which plays throughout New Hampshire and New England. In addition, Eric presents comprehensive workshops and talks on pan, and the culture of Trinidad and Tobago where the pan originated.

Eric has a B.S. in elementary education. He teaches percussion at Mountain Top Music. He directs the community steel band “Steel Dreams” in Conway NH. and builds and tunes pans for steel bands throughout New England. His other endeavors include playing African drums and calling contra dances.